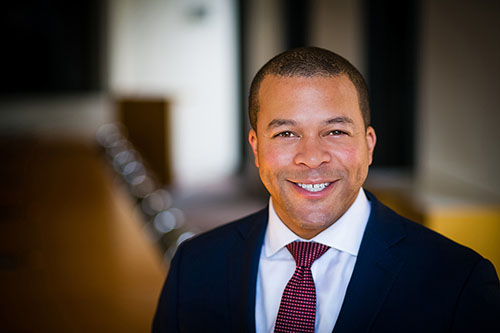 Mr. Favors received a B.A. in Political Science from Yale University.  He received a J.D. from Harvard Law School, where he was a Class Marshal, Co-President of the National Security and Law Association, and a member of the executive boards of the American Constitution Society and Black Law Students Association.  Mr. Favors also worked on the editorial staff of the Harvard International Law Journal, Harvard National Security Journal, and Harvard Law & Policy Review.

As a student attorney with Harvard Law School’s Criminal Justice Institute, Mr. Favors worked as a public defender and co-chaired a felony jury trial that resulted in an acquittal.  He also served as a member of the trial team that defended and won acquittal of former New England Patriots professional football player Aaron Hernandez in a jury trial for double murder.  At Wachtell Lipton, Mr. Favors has participated in a number of the firm’s high-profile matters, including representation of national health insurer Cigna, Inc. in a Delaware Chancery Court dispute and trial over a busted $54 billion merger with rival health insurer Anthem, Inc., and, separately, the firm’s defense of IAC/InterActiveCorp and Match Group, Inc. in multi-year litigation and a Manhattan jury trial in which the co-founders of Tinder, the popular dating application, alleged that IAC and Match Group undervalued Tinder by $10 billion in an employee equity settlement event.

Before entering the legal profession, Mr. Favors worked as a national security professional for more than a decade.  His prior experience in federal government includes domestic and overseas assignments as a diplomat with the U.S. Department of State, an operations officer with the Central Intelligence Agency’s Clandestine Service, and a member of the National Security Council staff at the White House.  At the White House, Mr. Favors helped manage the U.S. Government’s Middle East and North Africa policy and was a member of the small team of White House personnel tasked by President Obama to orchestrate and oversee the administration’s contacts and engagement with Iran, which ultimately culminated in the Iran nuclear deal.  Years later, as an advisor to the 2020 Biden-Harris campaign and member of President-Elect Biden’s Transition Team, Mr. Favors co-led policy development and strategic planning for the incoming Biden-Harris administration’s readiness review of the U.S. Intelligence Community, including with respect to the roles, authorities, and operations of the Office of the Director of National Intelligence, the Central Intelligence Agency, the National Security Agency, the National Security Council, and the President’s Intelligence Advisory Board.

Mr. Favors is proficient in Arabic and is a term member of the Council on Foreign Relations.  He is admitted to practice in the State of New York, the U.S. District Courts for the Southern and Eastern Districts of New York, and the U.S. Court of Appeals for the Fifth Circuit.